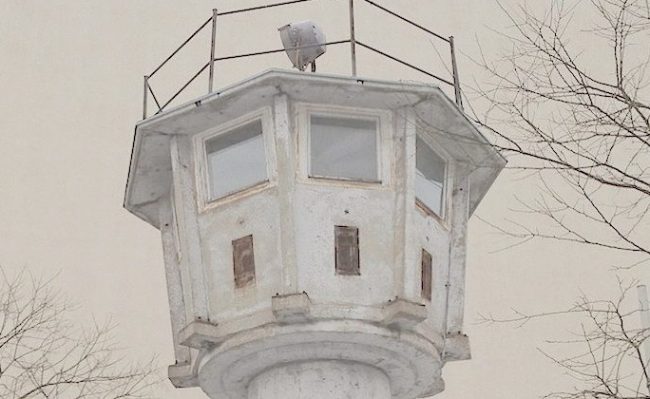 One of the things I love about Berlin is that this city can still surprise me. Even after years of working as a private guide I still discover new things – or old things with a new aspect to them.

Five years ago today I had the pleasure of leading a delightful couple from the United States around Berlin. We had a full 2 days so we were taking our time and talking about things in great detail. As we reached Potsdamer Platz and were talking about the division of the city I wanted to show them an old guard tower which hides around a corner. Most people have no idea it is there – hidden down a little side street next to a modern apartment block and behind a bunch of trees it is not easy to spot if you don’t already know where it is.

As we approached that day I saw something was different – the access door was open. Hmm I thought – strange, I’d never seen it open before. As we got closer there was a man standing next to the door and I asked him what was going on, why was the door open. Astoundingly he told me we could go up inside if we paid €3.50.

My jaw dropped. I couldn’t believe my ears – I had been to this tower so many times before and it had always been shut up tight with nothing more than a little sign. And now I was able to actually go up in it??? To stand where the border guards had stood, armed with their long range rifles, looking for people desperate enough to try and run the gauntlet of the notorious death strip to reach freedom. This was an opportunity not to be missed.

Inside the tower was a small, vertical ladder and I climbed hand over hand. Up the top was a small room with windows in all directions. You would not want to be too tall here. Or claustrophobic. I was really very small. The windows were dirty and there were old electrical wires on the floor. There was graffiti, some of it showing the symbol of the radical left group Antifa (the abbreviation of Anti Facism).

I looked out on to the back courtyard and rubbish bins of the luxury flats and thought about how it would have looked back then – an empty expanse full of alarms, signal fences, vehicle barriers, sand traps and more.

Since that day 5 years ago I have had the privilege of taking many more people on a private tour to see the former DDR tower.  Some choose to make the climb, others don’t.  Each time we meet the volunteers who make this remarkable opportunity possible.  Some have amazing stories to tell of the former times in the GDR, all are informative and engaged with what they do.  And each time I am reminded how grateful I am to live in Berlin now, and not back in the 1960’s.