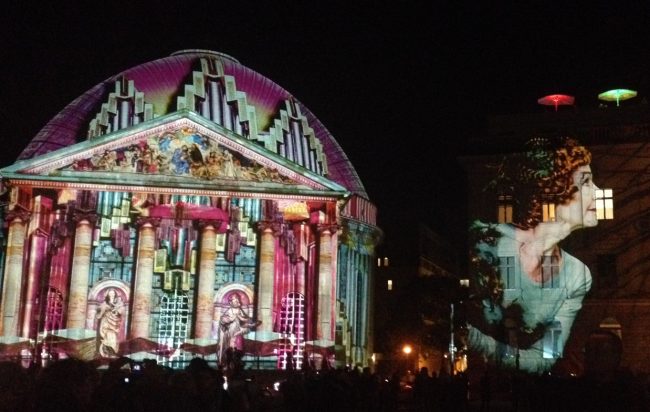 Every October, Berliners start to sigh and moan about the summer being well and truly over. The days get noticeably shorter and we all dread the turning back of the clocks which heralds the onset of long, dark, cold winter months.

But one thing happens every year to cheer the souls of Berliners and tourists alike at this time of year. The Berlin Festival of Lights. For 2 weeks every October, Berlins biggest icons are lit by some of the worlds best lighting designers, creating amazing displays of colour and pattern. It really is something to behold.

The first Festival of Lights

I remember the first ever Festival of Lights in Berlin – which I must say I found profoundly disappointing. The TV tower was pink. The Berliner Dom was purple. Big deal. I didn’t go again for years. But now, a decade or more on, the festival has developed to become something truly fabulous. This year there was a giant insect crawling on the top of the Berliner Dom. Shadows of tourists raced along it’s upper balcony. Lighting artists are able to use digital mapping to exactly match projections to the architecture, creating some amazing effects unique to the shape of that particular building.

I saw the Staatsoper on fire

Before a pudgy angel walked along it’s upper storey and destroyed the floor below with her wand. I saw performers projected larger than life on the Hotel de Rome and a pop art/baroque hybrid mural of magnificence on St. Hedwigs Cathedral. Some buildings simply had interesting interchanging patterns, some had kaleidescopic 3D illusions. The European House had all the flags of the union and the EU flag projected onto it – rather a statement in these uncertain European times.

But the Gate – oh the Gate.

It is usually always the highlight and this year was no exception.

I stood for over half an hour at the Gate and did not see a single image repeated. Several different artists had been chosen to create different installations for the Gate which were as unique as they were beautiful. One explored the theme Freedom, which projected statement after statement from Berliners about what freedom meant to them, followed by large hands breaking through the Gate, seeming to tear it down, wearing the iconic watches previously known from the infamous (now painted over) mural by street artist Blu. One had a mixture of nature and portraits which fitted the Gate like a glove, transforming it into something breathtaking. The next was a long but interesting concept using emojis to explore notions of diversity and strength through difference through modern symbols. Interspersed with psychadelic patterns and fluid motions, one designer even mimicked the wrapping of the Reichstag by the artist Christo many years ago to make the Gate appear that it had been wrapped. Which indeed, it had been – wrapped in light.

Wonderful optical illusions to lift you out of the depression brought on by early dark autumn evenings and transport you into a world of possibilities. Light streaming through the darkness.

(*and yes, we offer private guided tours of the Festival of Light installations each year!)