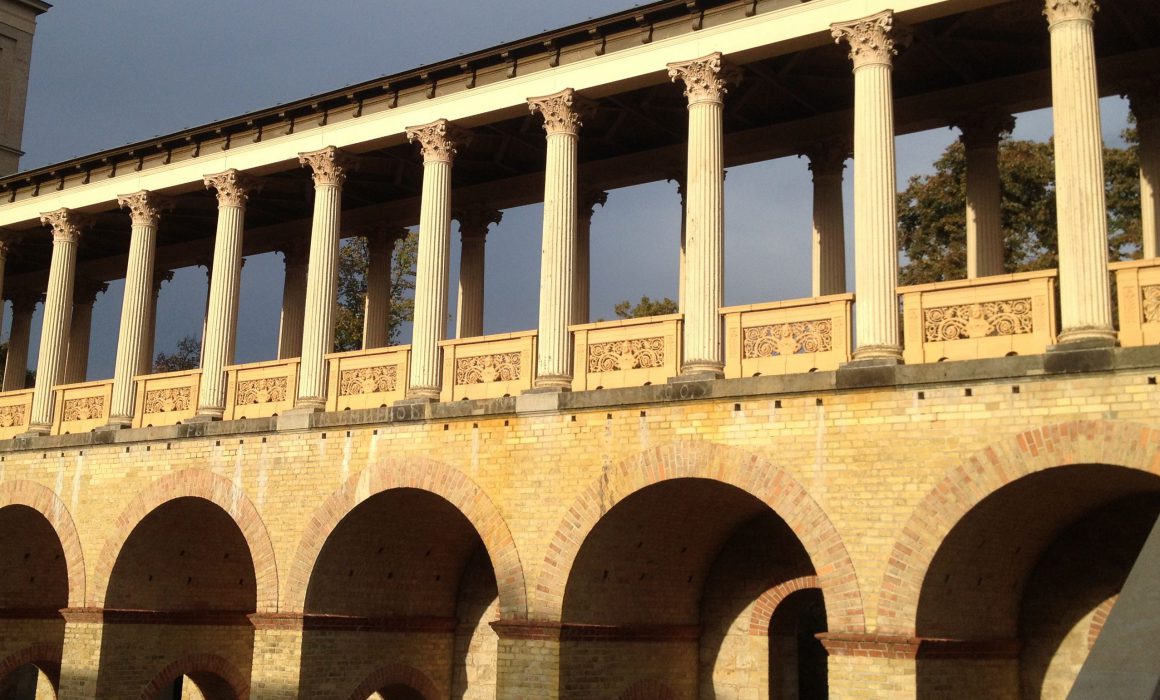 In Potsdam there are so many palaces, gardens, follies and gazebos it’s hard to know where to begin. But with a private guide at your side you have a headstart.

And on a daytrip from Berlin the vast majority of people who go to Potsdam only see the famous (but rather small) palace called Sans Souci (Without Cares) built by Frederich the Great. A few more make it to the New Palace, or Cecilienhof to see where the conference with the big three took place after the war. But Potsdam has so much more to offer.

something out of the ordinary

One of my favourite buildings to visit is not actually a palace at all, but rather a Belvedere (lit. Belle Vedere meaning beautiful view in Italian). And in fact it was never actually completed, but even the small beginning of the original idea is stunning, with a simply breathtaking view if you climb the tiny spiral staircase to the top of the towers.

Commissioned by Freidrich Wilhelm IV, otherwise known as the Romantic on the Throne, the project was severely delayed due to financial problems.  The king died in 1861, two years before the project was completed to it’s current degree. But it is still only a tiny portion of the grandeur which he had originally planned. As with all of the buildings commissioned by the royal Romantic, it’s design harks back to early italian rennaissance style, and is markedly different to any of his predecessors choices in architecture, featuring square towers, arcades and colonnades inspired by various famous italian villas. A beautiful reflecting pool is featured in the first courtyard.

At the turn of the 20th century it was already open to the public and had begun to draw people from far and wide to take in the spectacular views from the top of the tower.  After the creation of East Germany as a country in 1949, the russian KGB moved into the residential area below the Pfingstberg and visits to the Belvedere were strongly discouraged and the building allowed to fall into disrepair. After reunification it was taken over by a citizens group, who managed to raise the funds necessary to restore it to it’s current glory. And it really is a remarkable transformation – from a crumbling, overgrown memory into a wonderful realisation of the kings vision.

Climbing the stairs to the tower lookout with my husbands mother on a fine Berlin spring afternoon, I was rather puffed when we reached the top. Embarrassed that my 75 yr old mother in law was fitter than me I tried to calm my heavy breathing enough to point out what we were looking at. A remarkable panorama unfolded before us in full 360 degree glory. Stretching before us were vast swathes of greenery, interspersed in with lakes and the glittering skyline of Berlin in the ditance (yes, on a clear day you really can see all the way to the TV tower in east Berlin!). After savouring the view for rather longer than necessary (my husband begain to wonder where we were) we climbed down from our airy turret to rendezvous once more with the mortals below. On my return climb I was imagining the lords and ladies dressed in their 19th century finery trying to navigate these stairs! These days it’s not just open for visitors wanting to exclaim over the view, but is actually able to be booked for private parties – it is a very popular wedding spot for example. So if you want a party with a true fairytale feeling, get in touch with the folks running the Belvedere am Pfingstberg.