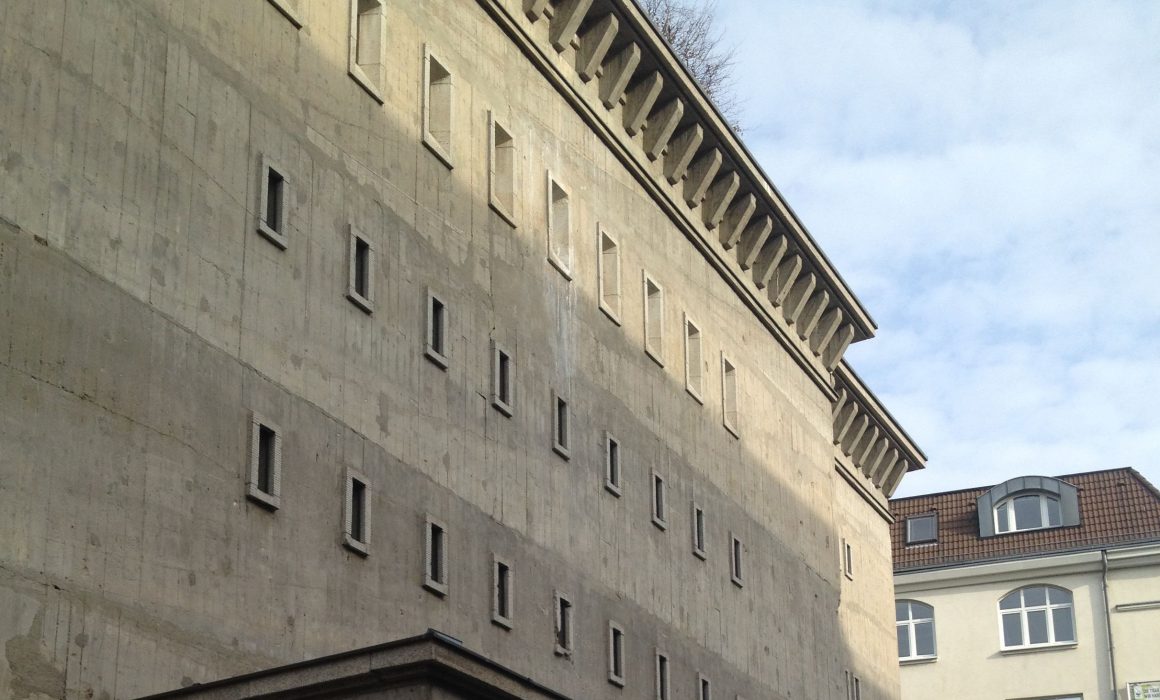 If you’re wandering through part of Berlin’s Mitte district, down a little street near the Friedrichstadtpalast theatre, you will come across an extraordinary sight.

Looming amonst the small cafes and pretty shops is a massive, monstrous concrete construction, 6 stories high, pocked with bullet holes and with teeny tiny dark windows lined up like toy soldiers along it’s gigantic outer walls.  This, for those who have the fortune to never need one, is a bomb shelter. One of the few left over from WWII in Berlin, it was once a site where locals cowered in terror as the Allied bombs rained destruction upon Berlin in the final years of the War. As head of the German airforce Herman Göring claimed the British fighter planes would never reach Berlin, and so Hitler was rather slow to build the necessary shelters for the civilian population (although of course he had a private bunker for himself completed by 1938). This bunker was only constructed in 1941, long after the British bombs began falling on the capital.

Originally designed for only 1200 people it was expanded to house 2000, but by 1945 had at least 4000 people crammed into its internal rooms. It was orginally planned only for the staff at the Friedrichstrasse train station situated close by and Hitler, in all his meglomania, believed that after he had won the war this bunker would be covered in red marble and become a memorial for the final victory in his new world capital city Germania (as my husband commented – it’s quite pretty for a bunker really!).  Of course, that final vision of Hitler’s never came to pass and after the war, this was temporarily used as a russian military prison before being turned into what was essentially an oversized fridge for the DDR politicians. Dubbed the ‘Banana Bunker’ by the locals, it was where exotic fruits imported from Cuba were stored – not for distribution in the shops mind you, but kept for the hoi palloi of the Politburo members. After reunification, it was temporarily used as a techno nightclub called aptly ‘The Bunker’ which specialised in Fetish parties . So suffice to say these thick conrete walls have seen a lot in their time!

In 2003 it was finally bought by Christian and Karen Boros – art collectors and historians who were looking for somewhere not only large enough to display their sizeable private collection (at this stage around 750 pieces) but also somewhere they would like to live. After a massive 5 year overhaul, including the removal of approximately 1500 tonnes of concrete and building a large modern penthouse on the roof to live in, phase one of the Boros Collection opened to the public. They exhibit the works in four year blocks – currently in phase two with 130 works on display, phase three will launch in 2016.  The only way to see the bunker (and the collection of course!) is to book in for a tour ia their website. Public tours cost €12 per person, last 90 mins and are available in English or German. Private guided tours are also possible of course, but book well in advance as in summer it will be booked out, trust me.

As I wander through this massive concrete structure, where ceilings and walls have sometimes been removed to create space for larger installations, I am a little overwhelmed by the juxtaposition of past and present. In these rooms where people once crammed in fear with explosions all around them you now have a popcorn machine, spewing out mini explosions of popcorn for two years now. Or a dead weeping willow branch attached to a motor so it circles round and round in endless circles, trailing it’s branches through it’s own dust. Rubber inflatable tyres squeezed through one another and crammed (like the people were) into a tiny space. Pristine white walls, fluorescent lighting the subtle yet distinct sense of wealth. Strange sounds echo throughout some of the installations, a door slams, a bell rings in the distance. And it’s cold. How cold must it have been for the locals in that final winter of ’44/’45 when the bombs fell almost constantly, the supply lines had been cut off by the approaching Russian troops and people would dash out in bewteen the bombs to scavenge for food. What ghosts walk these halls between the art installations when the lights are out and the tourists have gone home? What would they think of this dimension, this different reality?

To book a tour with the Boros go to http://www.sammlung-boros.de/boros-collection.html?L=1