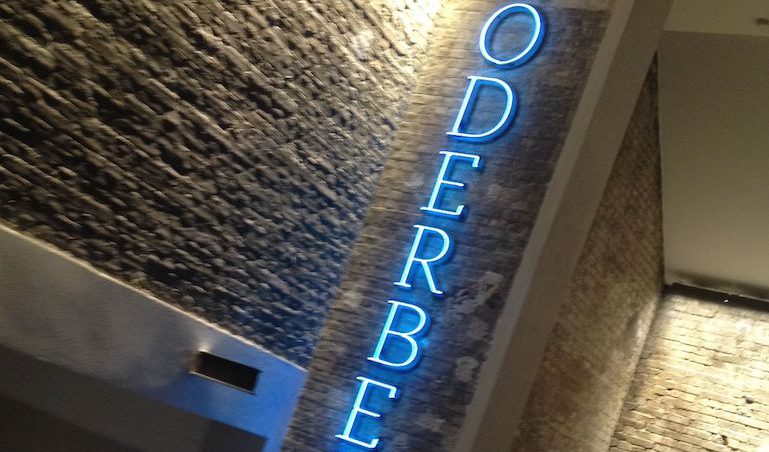 Imagine Berlin at the turn of the 20th Century. It was big, dirty, teeming metropolis. The population tripled in 30 years.

In 50 years it had quintupled (is that even a verb?). Industry was booming and there was a massive housing shortage.

Workers lived in what were known as ‘Rental Barracks’ – large blocks of tenements where workers often shared many people per room and sometimes more than one person per bed. Come to the big city and make it big. Mark Twain called it the Chicago of Europe. Imagine living in those buildings, working a 12 hour shift in a factory or in the streets. Imagine having no shower. No bath. If you were lucky you lived in one of the buildings that had recently put a small toilet in the stairwell and connected up to the brand new underground sewerage system. But many didn’t. Imagine a hot, dirty summer with nowhere to wash.

And so the concept of the public wash-house made it to Berlin. Around the city, mainly in the workers areas, public baths began to get built. The Stadtbad Oderberger in the northern workers district of Prenzlauerberg was built, finally being completed in 1902. With a 20m long swimming pool and 190 shower and bath compartments it must have been rather state of the art and imposing in those days. Interesting to note is that there were 130 compartments for men and only 60 for women. The reasoning being that women did not do hard labour and therefore needed to wash less often. Wow.

After the Fall of the Wall

The Oderberger public bath was an icon of the Prenzlauerberg district, staying open and operational as a public swimming pool right up until 1986, three years before the fall of the Berlin Wall. Indeed, I even know someone who learnt to swim there as a child. After it was shut down there were no renovations done to it in the turbulent years after reunification. Government priorities were rather on upgrading housing, putting in telephone lines, privatising state owned industry and dealing with the multitude of issues arising out of re-unifying to separate states. But several years ago the city put out a call for proposals of how to renovate the old public baths on Oderbergerstrasse (Oderberger Street). And that where the family Jaeschke stepped in. They submitted a concept to turn the old public baths into a hotel. Complete with swimming pool of course 🙂

6 years later they are almost ready to open to full capacity. The condition of the city was that the swimming pool still be open to the public for 5 days a week – which it is. The other two days the swimming pool hall is used for private events. No – not underwater knitting workshops – rather, the new owners have a fabulously creative mechanism which raises the floor of the pool, draining the water into the space below, so you can literally lay a carpet flooring and dance on the swimming pool! When we did a private tour there lately with the owner, he was terribly proud to go into all the engineering details of how the construction works, how safe it is etc, and I have to admit, it’s a pretty inventive solution to maxmise the use of space! They’ve turned some of the old shower cubicles into small seminar rooms and not only do they have the original tiling, but there are still the soap holders protruding from the walls!!

All in all I was actually quite impressed with the way they’ve approached the renovation and how true they have remained to the original architecture. With a small but lovely lounge bar downstairs with a roaring fire in winter, I could imagine worse places to stay on a visit to Berlin.

Walking back home on a cold wintry evening I look around at all these former tenement buildings which used to house the poor exploited workers of Berlin’s industrial boom – now they have all been turned into gorgeous apartments with 3 metre high ceilings and hardwood floors. And it surely is a huge improvement on the living conditions those early immigrants workers to Berlin had to deal with back in the late 1800’s! An apartment up here would easily sell for half a million these days. I wonder what the workers from the old days would have made of that?