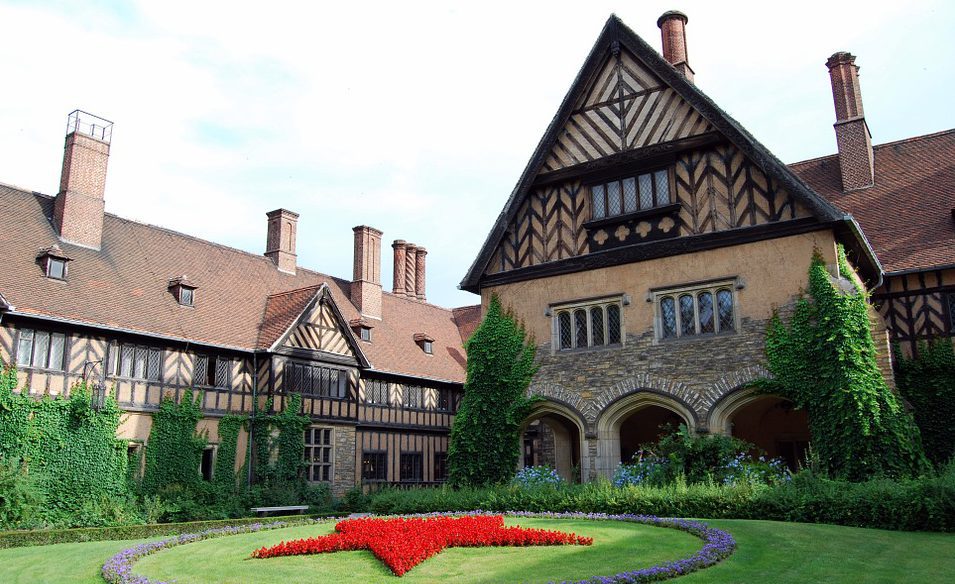 It’s easy to see why. Lakes, rivers, gardens, quaint little streets – there’s nothing I like better than to take clients of mine on a guided private tour away from Berlin for a day down to Potsdam on a clear sunny day. Many people who contact me for a tour have heard of Sans Souci – the famous abode of Frederick the Great. Fewer have heard of Cecilienhof, which I think is a shame. I always make sure to include this for my clients as I find the double layer of history there adds an immediacy that Sans Souci lacks. I mean, Cecilienhof was not just the residence of the last crown Prince of Germany, but the place where the fate of Europe was set for the second half of the 20th century.

Built for Cecilie, the wife of Crown Prince Wilhelm, son of Kaiser Wilhelm II it is built in the old Tudor style of England. But don’t let the looks deceive you – when it was completed in 1917 it was the most modern palace ever designed, complete with central heating (which still works nearly 100yrs on), running water, ventialtion system, electricity, phone lines and all mod cons of the day. Upstairs in the private chambers of the royal couple, you can even see they had a specific ‘spitting basin’ for after having brushed the royal teeth, complete with a spiral flush system! Not bad for 1917. Cecilie was known to never wear the same dress twice. Forced to flee after the revolution which deposed the Kaiser at the end of WWI, Ceclie eventually returned to live there until fleeing again in 1945, this time running from the Russian soldiers.

After the war was over, it was chosen as the site to host the Berlin Conference (the fact that it’s not actually in Berlin notwithstanding!). Imagine – Nazi Germany defeated, Berlin in ashes and ruin, the population starving, Europe in chaos. Where do you go from there? The decisions lay in the hands of three men. The leaders of their time whose armies had defeated Hitler and his meglomaniacal plans. An uncomfortable alliance that would very soon crack and break, leading to the next war – a war of information. Of spies and espionage. The new age.

walking in the steps of history

Who would not want to walk in the footsteps of Stalin, Churchill and Truman as they negotiated the fate of post WWII Europe? To know it was from here that Truman gave permission to drop the fatal A bomb? Telling the stories of Stalin’s paranoia, Churchill being deposed as prime Minister, or Truman deciding the fate of thousands of Japanese civilians while standing in these rooms is something of which I never tire. The table, the flags, everything is exactly as it was in the summer of 1945. It is easy to imagine the posturing, the power struggles, the behind the scenes conversations.

Sans Souci is beautiful, and the Prussian kings have their share of stories too. But don’t let a private tour to Potsdam end without seeing this amazing place, the tipping point of the 20th century where three men met and decided the fate of millions.