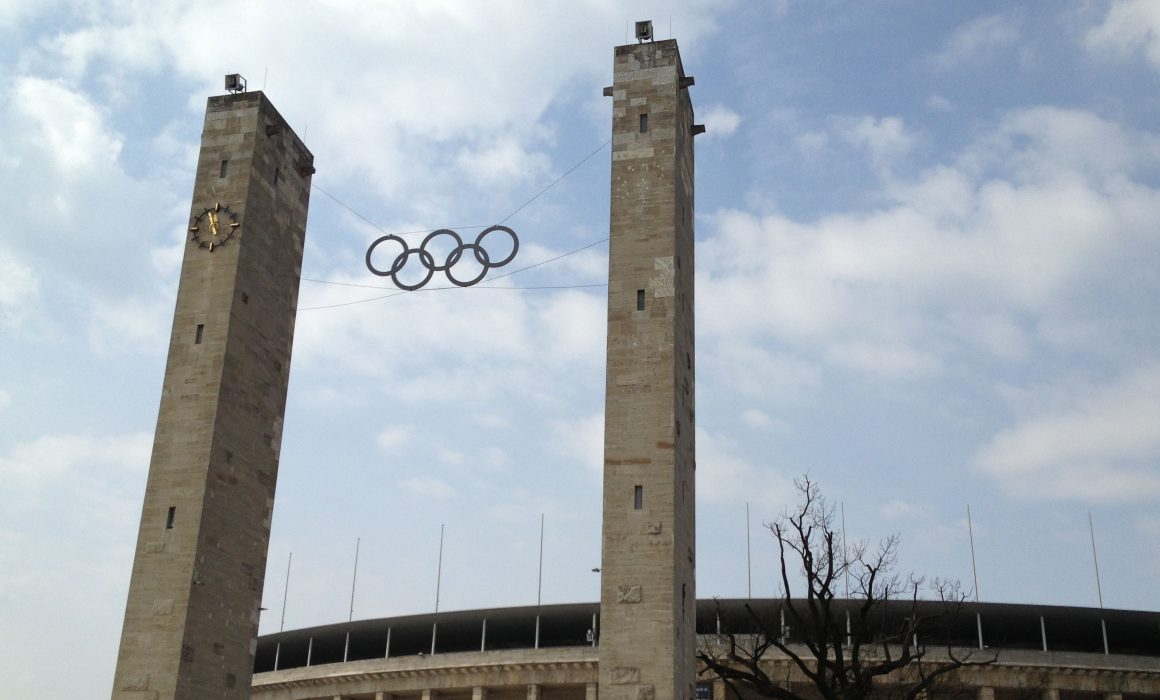 Let me state openly – I am no sports fan. I have never attended a live sport event, and avoid watching them on TV.  It’s just not my thing.

I find cricket interminable and football (soccer) just boring. I can just about get through a tennis match if my mother makes me watch it with her and that’s about the extent of my sporting interest. And this sentiment I had while growing up in a country (Australia) where sport is a huge part of our national identity and where ‘good sportsmanship’ is held to be a significant virtue.

And then came the Olympics

Perhaps this is why it I am so fascinated with the Olympic stadium in Berlin, now the home to Hertha BSC – Berlin’s notoriously bad soccer team. In the end my interest there is less as a soccer fan (hah!) but rather to try and understand the role which the 1936 Olympics played in the Nazi propaganda machine, showcasing Berlin and indeed Germany, to the world. And the way in which the world bought into that propaganda, wanting to believe what they heard.

To clarify the historical setting:

Berlin had been due to host the 1916 Olympic Games, which were then cancelled due to the not-so-small interruption of the first world war. Then in 1920 and 1924, Germany was banned from competing in the Olympics, as part of their ‘punishment’ for starting WWI. (By the way, there are currently some very interesting arguments about this long assumed point, this year being the centenary of the beginning of WWI). 1928 Germany was finally allowed to compete again, and in 1931, was awarded the honour of hosting the 1936 games, as a sign that they had once again returned to being a ‘civilised’ nation. And while this was before the Nazi’s came officially to power, it was certainly at a time when they were very much a serious political force to be reckoned with. Whether the Olympic Committee would have awarded the Games to Germany once the Nazi’s were in power we’ll never know, but I consider it unlikely.

I find the architecture of the Stadium astounding. Let’s face it, even today it’s an impressive building. Classical romanesque structure meets modern day technology (the stadium was renovated and completed in 2004, hosting the world cup in 2006). Larger than life, at the time it could seat 100,000 people, then being the largest in the world (Nazi Germany had to be bigger than anyone else, of course). These days after applying modern safety regulations it can only seat 75,000, but that’s still a lot. The view through the Marathon Gate to the bell tower is just as impressive today as it would have been in 1936. But it’s hard to ignore the inward, xenophobic nature of the architectural details. Such as only German athletes a being listed on the pillars commemorating gold medallists outside the main stadium. The Langemarck Hall under the bell tower, makes a somewhat strained but indisputable parallel between sporting competition and outright war, being named after an infamous WWI battle in Belgium where many young German soldiers died.

Hitler was a bad sport

Many people are aware that when African American Jesse Owens cleaned up with 4 gold medals in track Hitler notoriously refused to congratulate him. However, many are unaware that Hitler refused to congratulate any athlete who won an event at the Games who was not German. This public shunning of foreign victors must have been rather alarming, even at the time. And a clear indication of the mindset necessary for the attempt to dominate Europe which was was to come just 3 short years later. All very clear in hindsight, of course.

This year with the Winter Olympics being held in Russia shortly after their controversial laws against ‘advertising’ homosexuality were passed, there was much press discussion here and internationally over the similarities (or not) between the two Olympics. I do not have a crystal ball, and I cannot see outright what will happen for people who identify as homosexuals in Russia. I can certainly see they are not having an easy time at the moment. And I can see that the international community is largely willing to overlook this in the light of the Sochi Games. And I fervently hope that this time our hindsight vision will show that these 2014 Games are indeed, different to those in 1936. I hope.