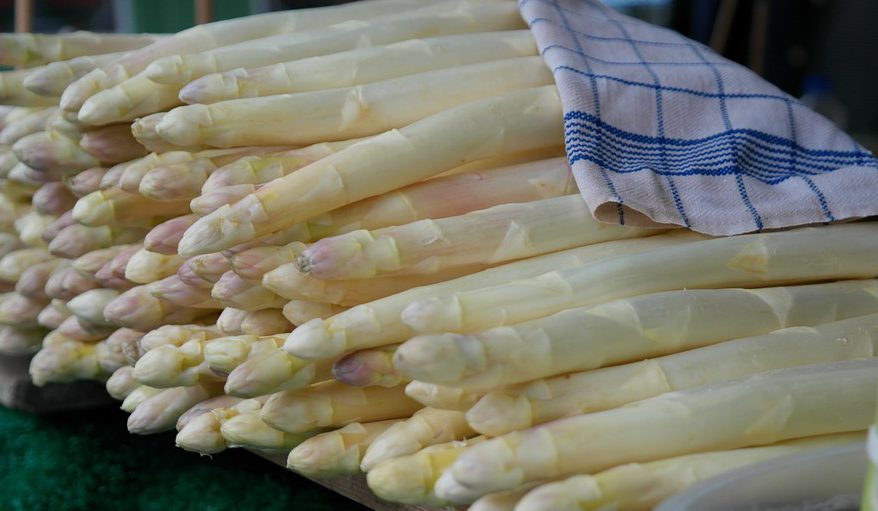 Spargelzeit. Aparagus Time. I think this is my favourite time of year in Berlin.  If you’ve not eaten white asparagus German style yet, you must come taste it for yourself!

Spring has sprung, the leaves are bursting with what seems miraculous speed out of the bare trees, the sun (mostly) shines and best of all – Asparagus season has begun!!!

A season for everything

Asparagus has a season??? I hear you ask. Oh yes, in Germany it certainly does. And what a glorious thing it is too. Growing up in Australia Asparagus meant thin green spears, available pretty much year round, and cooked very lightly so it was still crunchy. Stirfrys, pastas, you name it, you could do it with asparagus. Not here, oh no no no. Germans take their asparagus very seriously.

Only white will do

In Germany asparagus is white. With perhaps faintly purple tips. This is created by painstakingly mounding up the dirt as the spears grow so they don’t get exposed to the sun. (to be fair, you can also find green asparagus, but it’s not common and they generally don’t know what to do with it…). Asparagus is only allowed to be harvested in a very short time frame in Germany, usually from the third week of April until the third week of June. Germans eat a vast amount of asparagus in this time. And with good reason – it’s delicious!

Asparagus season is amazing. Every cafe, every restaurant introduces a ‘Spargel Karte’, a special asparagus menu, that is only served for this short two months of the year. Asparagus soups, risottos, pizzas (yes), salads, with schnitzel or without it’s all there. The subject of sauce is debated and decided. In households across the country it is completely normal to eat asparagus at least once a week and often more. You use the leftovers and the cooking water for the soup the following day.

In April it’s really a huge feeling of anticipation when I go shopping. Is it Spargelzeit yet? Surely it must come soon. I saw some last week but it was from Greece and was all dried out… How much longer???

According to my purist German mother in law, asparagus should only be eaten with plain boiled potatoes (salzkartoffeln), parma ham and melted butter. No hollandaise, no schnitzel, and definitely no salad. You boil up the spears with the peelings (to increase the flavour) and use the cooking water to make the soup the next day. The soup’s traditionally made with a rue from butter and flour mixed with the cooking water (peelings now drained of course), with only some spare tips added for further flavour. The first asparagus soup I made for her she was shocked to see me simply pureeing a bunch of cooked asparagus in the soup stock (stock???shock horror – nutmeg???? she nearly fainted). I’ve since then learnt how to make the traditional version, which I have to admit, tastes better. Velvety smooth with a much more delicate flavour… Thanks to my mother in law I’ve become an asparagus purist. While I still love my green, crunchy spears when I can get them, the white version is my new favourite. With ham, potatoes and pure melted butter, country farm style. I can assure you, when that asparagus hits the shelves I’ll be queueing up with the rest of the Germans to get the freshest spears straight from the market and cooking it twice a week (plus soups) for those precious two months of the year!