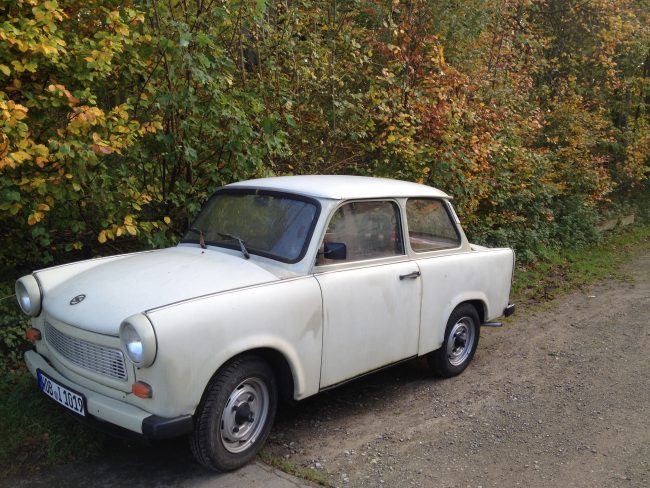 If you’d visited Berlin whilst the Wall was still up, say in the 1980’s and you’d applied for a day visa to visit the East and crossed at the Friedrichstrasse border crossing, one thing would have struck you immediately as you wandered the streets of East Berlin. The cars.

Small, identical, cramped and looking like they’d crumple in any accident, the Trabant was the standard vehicle of the DDR. They look like play toys for giant babies. And they turned 60 this month.

The factory in Zwickau started producing Trabbis in November 1957 and over the years produced around 3 million of the tiny, cutesy cars. However demand far outstripped production and many people had to wait years and years before their car was ready. There are many jokes about trabbis – “first you smell them then you hear them then you see them” goes one. It’s not far wrong.

After the collapse of the DDR, many easterners loaded up their trabbis with whatever they had and drove as far West as they could. When they ran out of petrol the cars were often simply abandoned on the side of the autobahn whilst their owners hitched a ride to the next town. Indeed, I once had a client on a private tour in Berlin who was ex-British military. He’d been on duty in Germany at the time the Wall fell and said he’d seen US soldiers going along the Autobahn giving out free petrol to the drivers in the hopes that they’d keep driving on into the British zone and then the cars would no longer be their problem!

Despite government subsidies to try and keep the factory going after the wall fell, production ceased in 1991 and the Trabant became officially a thing of the past.

Now, 28 years on the Trabbi has developed an almost a cult status as an icon of a bygone era. You can do tours where you get to drive one yourself, or you can be chauffered around town in a custom made Trabbi stretch limo. Ironically, the cheap and inefficient “cardboard box with a motor” has now become a collectors item. Seeing original Trabbis (not the tourist ones) driving through Berlin is becoming more and more rare. But every now and then you’ll see one parked on a corner, or rumbling along belching out 2 stroke fumes and rattling as though it’s about to fall apart. Cartoon cars from an era when even having this little vehicle was considered a luxury and a sign of status.