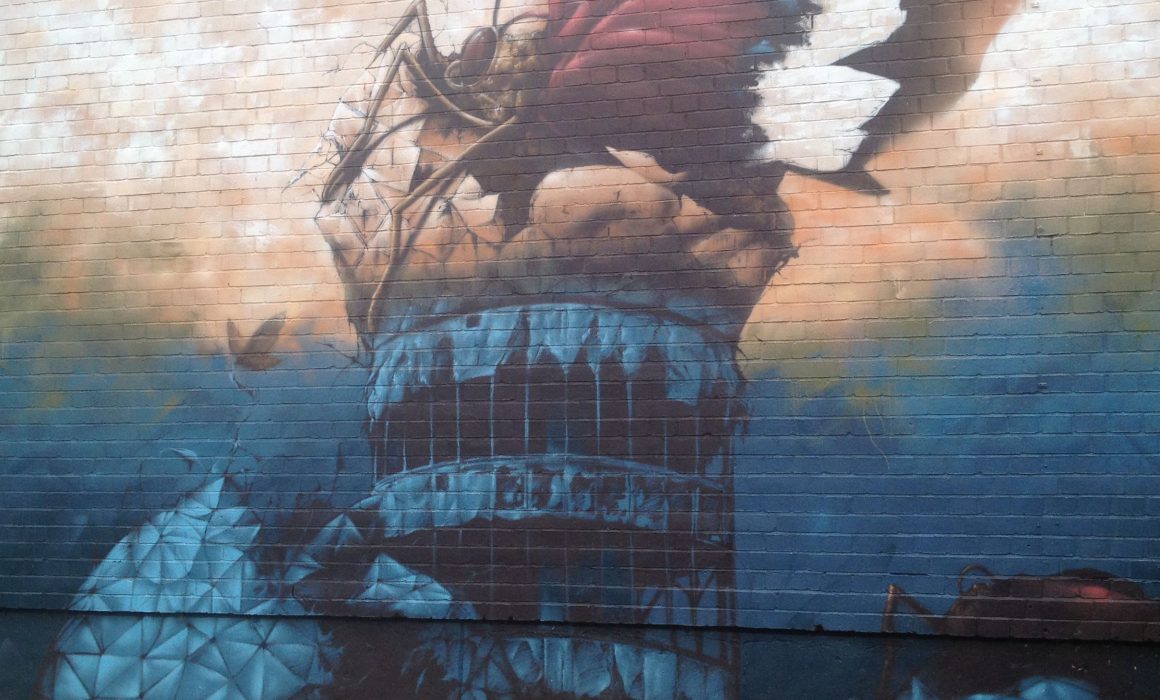 Teufelsberg.  The Devils Mountain. The name conjures all sorts of images – usually dark, deserted and dangerous. Perhaps haunted…
Imagine if you will the summer of 1945. The war was over. Finally. Berlin lay in ruins. Divided between the conquering powers, namely British, American, Soviet and French (as a minor player) Berlin was in shock. The bombs had stopped and Soviet soldiers no longer shot at anything that moved. Slowly supply lines were reinstated and food supplies began to trickle in.

Although the black market was really the only thriving business and money was virtually worthless, food was at a premium. The citizens of Berlin and the occupying forces began the very slow and arduous process of cleaning up. The centre of the city was unrecognisable. Depending upon which books you read the estimate is anywhere from 75-90% of inner city Berlin was destroyed. That creates a lot of mess. Rubble from the bombings littered every inch of the city. Estimated at approximately 100 million tonnes of rubble, it took literally decades to clear it all away.

Work began almost immediately with teams (often of women) literally clearing by hand and passing buckets of bricks down a line. At the end of the line, bricks which were considered still useable were stacked, and the broken pieces were piled into handcarts, which were then pushed to collection depots from where it was taken out of the city in trucks.

But where did it go? It was dumped in various places outside of the city centre, for example the Volkspark Friedrichshain has a large hill in the centre which is actually rubble from the war dumped to hide the remains of a massive bunker which was partially destroyed. But get up really high, somewhere like the Reichstag Cuppola or the TV tower at Alexanderplatz and look directly westwards.

Urban planning at it’s most bizarre

You’ll see a strange little out of place hill, with a weird almost mushroom like structure on the top. That is – the Devils Mountain. On the edge of the Grunewald, Berlin’s gorgeous forrested area in the west, it was formed by dumping 26,181,310 tonnes of rubble (I like to be exact about these things) creating the highest point of land in all of Berlin. Eventually the city council undertook a ‘beautification’ project, covering it with soil and planting trees. The strange looking building is actually a listening station built by the USA in the British sector, where they were executing strategic spying activities for the duration of the cold war. Much of what they were doing is classified, which means we have to wait til 2020 for the records to be opened. Stay tuned folks 🙂

Bizarrely there was also a ski jump constructed on the side of the hill which was used for competitive ski jumping through the 50’s and 60’s. Through the 1990’s when the spies moved out of Berlin the buildings and whole area fell into a very dilapidated state. But then Berlin became popular. Through the early 2000’s it was considered a rite of passage for anyone moving to Berlin to go out to the Grunewald and creep through the woods, find a hole in the fence and sneak in to have a look (similar to the Spreepark – you can see my previous blog on that site).

It was pretty wild in those days. Littered with trash and graffiti scrawled everywhere you really had the feeling you were stepping into another world, a post apocalyptic reality where people would hide in ruins and forage for food. These days, it has become a more regulated experience. The people who run the area now charge a €7 entrance and you can even do guided tours on the weekends. Rather than the street artists sneaking in under cover of night to furtively spray inside the revered tower they are now invited to create massive murals wherever they like.

Indeed, there is so much art there now it is hard to know where to look first. Some parts look like a 2nd hand junk shop, someone has set up a little garden, in other places there have clearly been people BBQing recently. Wandering through the vacant building leading to the main tower it’s hard to imagine that this used to be a state of the art surveillance station. I wonder what some of the old intelligence officers think of it now?

Covered in street art with trendy event companies using it as an exclusive venue for private parties and film screenings. The stairwell is pitch dark as I climb to the highest vantage point in the main tower. The light from my phone gives the narrow stairwell an eerie look. The platform allows an absolutely stunning (if rather windy) view of Berlin from afar. The wind ripping through the shredded teflon covers of the domes makes a strangely keening sound. A lone bathtub sits in the middle of the roof. Wooden pallets form a makeshift barrier, preventing me from getting too close to the edge. Empty beer bottles and candles indicate a party not too long over. This strange overlapping of realities, alternative art culture with old James Bond stereotypes.

With the very real danger of the Cold War now overlaid with Berlins party culture and emerging hipster framework. And still a sense of loneliness, in this post apocalyptic surreality standing on the rubble of WWII in the middle of a forest, here on the highest rooftop of all Berlin.

NB if you want a private tour at the Teufelsberg ask me how to go about it.