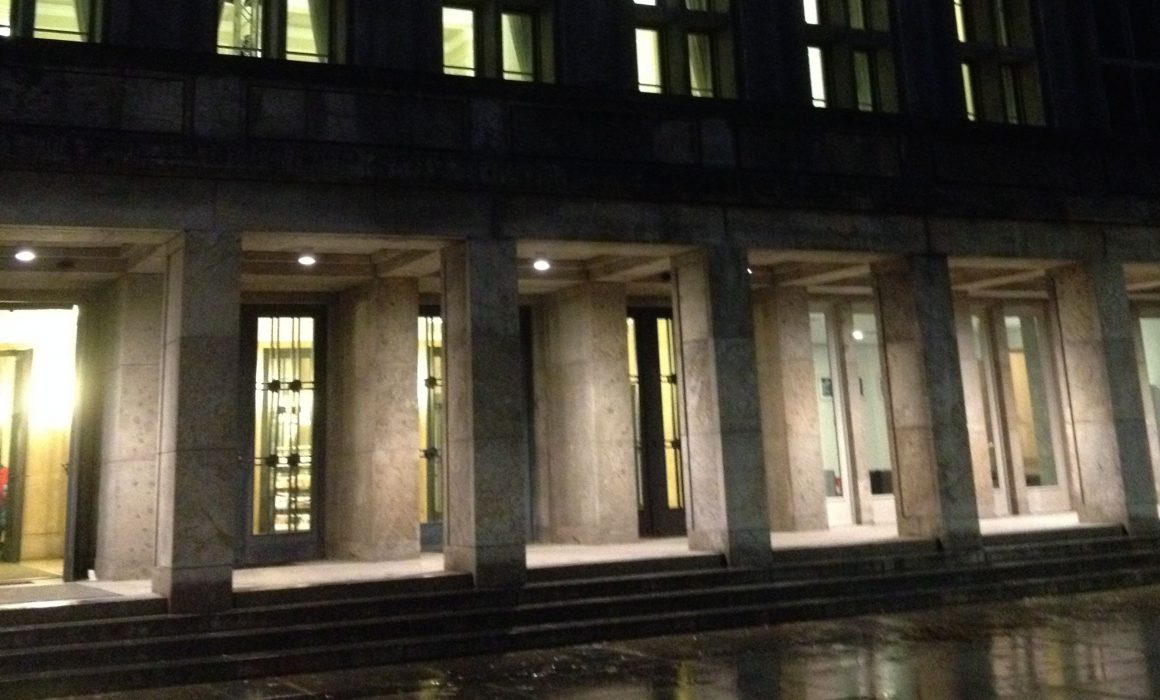 Walk through the former National Socialist government district in Berlin on a private tour with me, and a lot of what I do is explain what no longer exists.

So much was destroyed

So many buildings (not to mention people) simply didn’t survive the massive destruction brought about by the allied bombs towards the end of WWII. These days Wilhelmstrasse is a mish mash of wildy different architectural styles, from old DDR ‘Plattenbau’ blocks, to squat 1970’s embassies with brown tinted glass, through to modern design constructions from the last 10 years. Amongst all the variation there is one hulking monolith which dwarfs them all. The former Luftministerium – the Air Ministry which served as Herman Goering’s office and central command post for the German airforce from 1936-1945.

Most people are only able to walk past it’s facade and read the sign discreetly placed towards one end of the block.  I was fortunate enough to be given a private guided tour of the interior recently with some of my other guide associates. On a dark, rainy November afternoon I was given a privileged glimpse beyond the iron front gates.

Behind the secure gates

It’s an imposing building to say the least. Built with pomp and status in mind and in time to coincide with the Olympic Games held in the summer of 1936, it covers an entire city block and even today is one of Europes largest functioning office buildings. Statistics are impressive. More than 2000 individual offices. Seven kilometres of hallways, the longest of which is 300 metres. Enough flooring to cover 6 football fields. During it’s construction there were up to 6,500 workers on the site every day. Bear in mind the Nazi government had already dismantled the unions and established concentration camps several years prior to the construction – undoubtedly much of the work would have been done by slave labourers from that system. One statistic is notably absent from our excellent tour – there are no numbers known as to how many prisoners may have died during construction.

I was fascinated to find out that part of it’s original design (by Ernst Sagebiel) was a rather special roof construction. Apparently it has a kind of double ceiling, designed so that bombs would crash through the first layer, thereby slowing their velocity. They would then be ‘caught’ by a special curved underlayer designed with this purpose in mind and therefore limit the damage sustained to the building. Whoah. Backtrack. In 1935 the Nazi government were designing this building to withstand an aerial bombing?? This is even before Goering was put in charge of the ‘4 year re-armament plan’? Three years before the annexation of Austria?  Interesting. Look out the window and the entire opposite side of the road doesn’t exist anymore. Where there were once beautiful 19th century houses and estates is now…. a parking lot. But the Air Ministry? Apart from some superficial bullet damage and one part of the roof that had to be re-built, it’s in mint condition. After surviving the war it went on to serve many different functions and has worn many different faces.

Architecture as a witness

It has born witness to extraordinary events – the premeditation of murder, the destruction of war, the birth of not one but two nations, mass demonstrations ending in a bloodbath, a courageous escape and a cowardly assassination. It has played a crucial role in two oppressive and murderous regimes and even today bears those scars of unchecked nationalist fervour. But telling you more would be giving away too many of my secrets…. I have to save something for your tour now, don’t I?