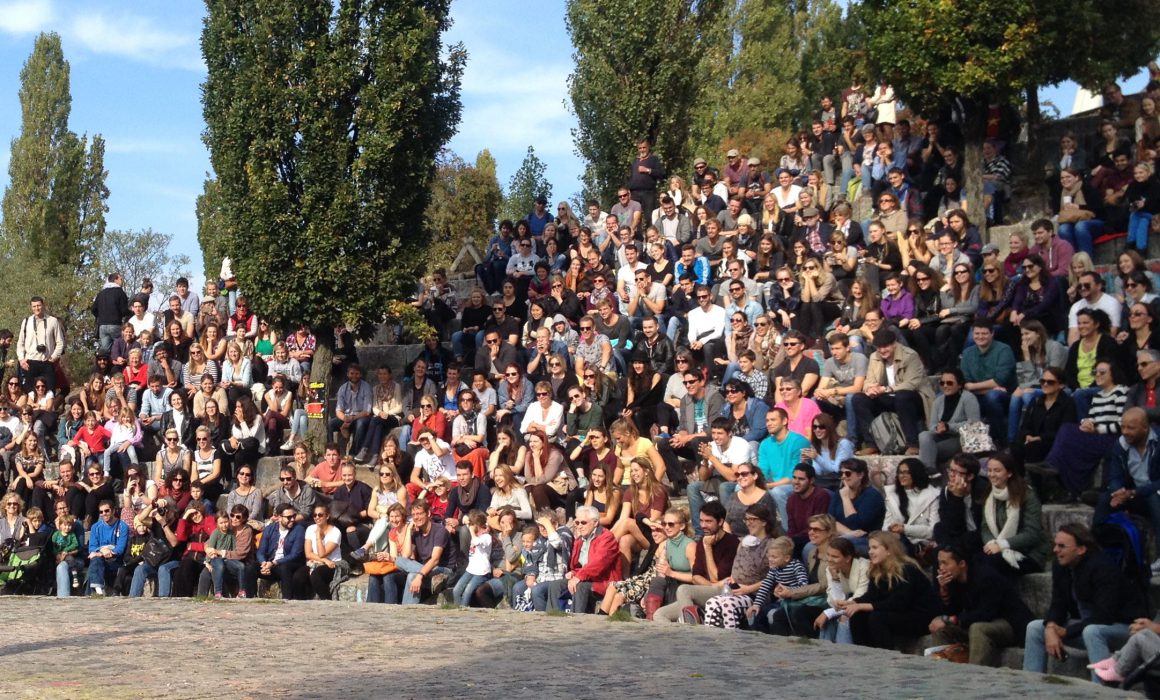 Mauer Park fleamarket is a Berlin institution. But there is another reason to go to Mauerpark on a Sunday, which has nothing to do with the markets themselves.

I’ve written before about the Berlin institution that is the Mauer Park fleamarkets on Sunday.  I love the range of things available, the strolling vibe, the diversity of people and accents that I see and hear as I wander amongst the stalls on a sunny afternoon.

Over the last few years the notorious ‘Ordnungsamt’ (literally orderliness department) have become more strict on enforcing Berlins laws around people performing on the streets. Admittedly, the scenes at the Brandenburg Gate with dozens of people dressed as everyone from Darth Vader to the Berlin Bear wanting money for photos to be taken was getting a bit much, and I was very happy to see them be banned from that area. /Technically in Germany you need to have a piece of paper called a ‘Gewerbeschein’ that means you have a commercial license and have permission to be out on the streets and if you don’t have one you can be fined.) But on the other hand, watching a fabulous pair of drummers who had drawn a huge crowd of appreciative people at Alexanderplatz being made to shut it down and pay a fine made me really sad. These people had made dozens of people happy on their otherwise mundane commute through the plaza, and now these artists were being punished for it. I understand there need to be regulations about these things, but it would be great to make it easier for the artists (who are often travelling through) to receive permission for legitimate street performances in certain areas.

Which is why I love Mauer Park on a Sunday. I’m not sure if the Ordnungsamt have made a formal exception up here or simply haven’t got around to policing it yet, but all along the park stretch are fabulous performers and singers who make any Sunday outing to the markets a joy. You can listen to funk ybands, melancholic acoustic soloists, kettle drummers or Mayna Rappers (not kidding). You can watch amazing 3 on 3 basketball or the quirky hobby robotics guy with his mechanical creatures, or the british fire juggler. You can grill on your own portable barbie or grab something from the street food section of the markets next door (though be wary of €2.50 waffled that don’t even come with a plate!). You can throw a frisbie or walk the dog or simply have a wander with the kids.

And as the markets begin to wind down after about 4pm, you can join the enormous crowd that gathers in the amphitheatre on the side of the hill for the infamous Bearpit Karaoke. Since 2009 an entrepreneurial Irishman called Joe Hatchiban began bringing a karaoke machine and singing himself and getting others up onstage too. Now there are regulars (both performance and audience) and the last time I was there I estimate nearly 2000 people were gathered on the hill on the pale dwindling October sun. It’s fun, it’s wacky, it’s totally Berlin. As is the entrepreneurial soul wandering through the crowd with a crate of beer, selling to the audience. It’s like a spontaneous music festival every weekend, and I love it.

Long may this last.