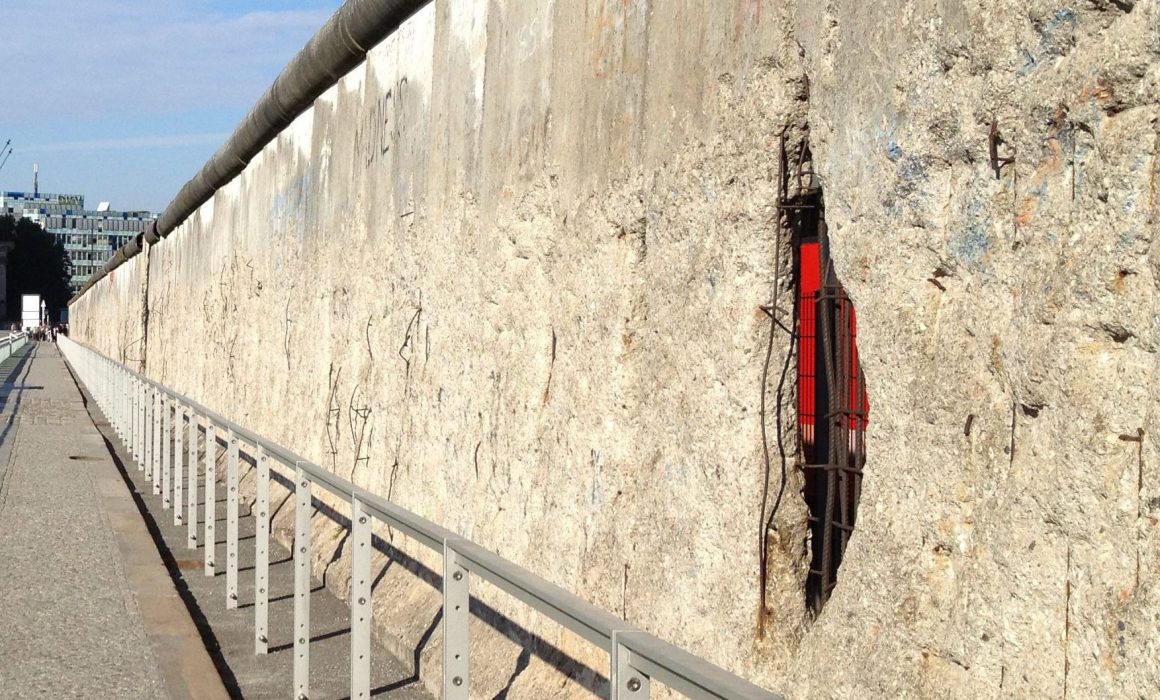 It’s the first week of November and things are positively buzzing in Berlin – because on the weekend it will be 25 years since the fall of the Berlin Wall.

Well, it didn’t exactly fall over as such but it did at least open, allowing for the first time in 28 years free travel between the East and the West. And without a single bullet being fired.

25 years ago this week, demonstrations were sweeping the country (thanks to the courageous people in Leipzig who had faced off with the military who didn’t dare open fire). On the plaza beneath the TV tower at Alexanderplatz in Berlin at least 600,000 people gathered to force change from the government. I said at least 600,000 – some reports say it could have been over a million. Days later a botched press conference led to masses of people storming the checkpoints, and in the confusion the fortified border became obsolete. Pictures raced around the world of people dancing on the wall, hugging, crying, sharing bananas and giving roses in the streets. Euphoria and a sense of fresh beginnings and unlimited potential swept the land.

Reunification has not been the ride to glory that many thought it would be. There is significant disparity between different parts of the country – in wealth distribution, in unemployment, in age demographics, voting patterns. East Germans are under represented in government, business and media. Some East German friends I know feel it was more of a western takeover than two things coming together again. However, despite the downsides and the fact that reunification of an entire nation has not been a wrinkle free process, a recent survey showed that the majority of East Germans thought they were better off now than they were 25 years ago.

How were things back then?

It’s one thing for me as a foreigner to try and imagine what it may have been like for the people who grew up staring at the Wall (from both sides). It’s quite another for those that lived through it to see Berlin as it is today. Sometimes I wonder if the people who suffered in prison under the Stasi in the old East get offended at the youngsters these days having fun driving around in Trabbants and staying in ‘Ost’ themed hostels and bars. Has desire for retro chic replaced our drive to understand how it really was in those days? Not that everything was necessarily bad in East Germany, not at all. But have we forgotten the lived reality of surviving under a Police State dictatorship? And can we spare a thought for those who had their lives ruined by a brutal regime? Some lost loved ones. Some lost their mental or physical health after years of imprisonment. All lost their freedom to speak out and choose who their representatives should be. Not to mention the freedom to read or write what they thought, see movies they liked (or not), or to go on holiday where they wanted to. Even just the simple freedom of walking through the Tiergarten was denied to half the population. It wasn’t all just retro wallpaper and 80’s hairstyles. It was a very real political struggle for very many people, some of whom still live with the consequences.

Spare a thought for them when they release the illuminated balloons along the path of the former death strip this weekend.