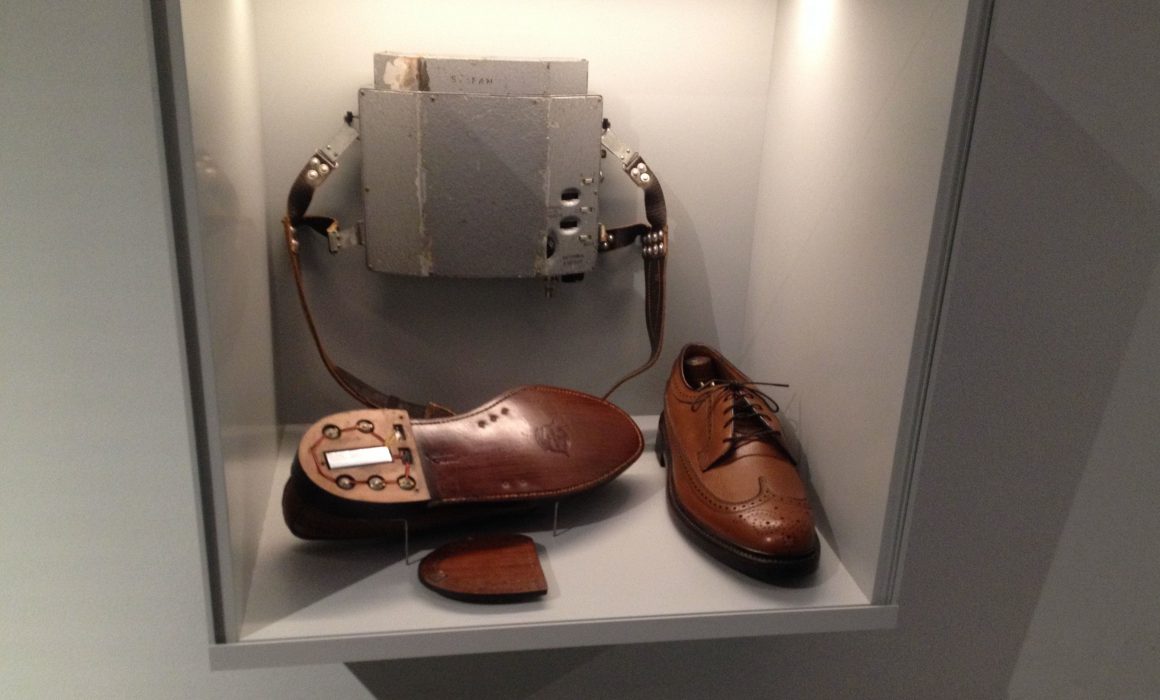 Espionage. Code words, secret meetings, hidden agendas, danger. It sounds like a James Bond movie, but is something which in Berlin was very real.

To Spy:   verb; to secretly collect and report information about the activities of another country or organisation (Cambridge English Dictionary)

Now, one could argue that the Cold War is well and truly alive and certainly spying and espionage is still going on around the world today, but it’s something that doesn’t seem to be discussed much in open terms. For somewhat obvious reasons, you can imagine. (Well, apart from Angela Merkel’s phone being bugged by the US, but that’s another matter). However in my work in Berlin as a private guide it is certainly something I discuss a lot, allbeit in terms of the past rather than the present (I could tell you more about the present, but then I’d have to kill you and we don’t want that now do we?). Seriously though folks, the stories of Berlin’s spy history sounds like a John LeCarre novel or Bond movie, but it was real life for the people who lived here – and in many cases, live here still. The Berlin Wall came down only 27 years ago, so this is well and truly still living memory.

Tunnels dug to tap the Soviet phone lines. Daring escapes by road, water and air made by ordinary people. Top level aides and intelligence operatives trading secrets in double agent scenarios. The notorious Romeo branch of the Stasi which trained handsome young men to seduce the secretaries of NATO. Spy exchanges negotiated and undertaken. Agents being broken out of prison by the KGB or mysterious disappearances of suspected turncoats. Really, the truth is often stranger than fiction (like the man who smuggled people out of East Germany in a fake cow. True).

Berlin, the front line of the cold war

For those of you who are fascinated by the stories of power, danger, agents, dead letter drops, surveillance and under cover spies, there are many places of interest to visit in Berlin. A wonderful trip down memory lane is the infamous Stasi HQ at Normannenstrasse. Or a more chilling visit to the Hohenshönhausen prison which I’ve written about in an earlier blog post. More recently we’ve had a new museum open up in Berlin specifically devoted to the history of espionage, with emphasis on what happened here in Berlin when it was the front line of the Cold War. It has some interesting displays such as parachuting pidgeons used by the British during WWI, or the original Enigma machines created by the Germans in WWII (and cracked by the first computer hackers over in Britain under the tutelage of Alan Turing). It had a smokers pipe pistol (the British again), a glass eye which was used to smuggle microfish, the obligatory Trabbant fitted with infra red cameras and even has a real shoe, fitted out with a radio sender used to transmit top secret meetings live (Maxwell Smart and Agent 96 look out!).

But with all this emphasis on technology (which was of course cutting edge at it’s time) it’s sometimes easy to see it simply as a film script or a whacky TV show, and to lose sight of the very real human cost of all this spying, espionage and whatnot. Becoming a spy is a lot more than just starting a new job. It begins a lifestyle change which can rarely – if ever – be changed back. Think of all the lives ruined, the lies told, the real people killed, and the devastating choices people have had to make along the espionage way. I once had a client who told me she hadn’t known that her father had worked in secret operations for the British until well after he was dead. What would that be like to live with? Not just for the wife and kids, but also for the father who lived such a double life, unable to share his experiences with his partner or children? Think of the personal betrayals, mental anguish and double binds which often accompany all the lies covering the real agenda. Not to say that spying hasn’t also yielded valuable results at times – the museum has a story of how WWIII was closely averted by a spy providing information to the Soviets which convinced them that the movements of US forces really were just an exercise, so they abandoned their plans for a pre-emptive nuclear strike. That was a close call averted by a savvy spy.

Is the cold war really over?

But after looking at all this evidence from the past whilst simultaneously worrying about the present state of affairs in the world, I still come back to the questions of human cost. The human stories.  And the reality that being a spy for some government agency is probably less glamourous and more deeply unpleasant than we ordinary folks can ever imagine. Thank heavens I’m only a lowly private guide in Berlin!